In 1904, Poppy Orpington founded Thunderbolt Motors in the hope of manufacturing fast, competitive cars which would be cheap enough for the average worker to buy and enjoy. History shows that by 1908, Poppy's dream had been cruelly destroyed, but what exactly occurred in those four years?

James Birkin once again picks up his pen to tell the real story behind the enigmatic Poppy Orpington, played out against a background of rising intolerance and the increasing certainty of war with Kaiser Wilhelm VI's Unified Germany.
The weight of history is pressing down and destiny can never be denied. And Poppy's final destiny is moving ever closer...

The Poppy Orpington Chronicles, (Full Throttle, Rise of the Petrol Queen, and now Fall of the Petrol Queen) is inspired by the rise and fall of Bentley Motors in the 1920s. As we enter the centenary anniversary of the founding of the company and the formation of the Bentley Boys, the most famous racing drivers of the day, the series stands as both a tribute but also a critical examination of the decade - an era of gross inequality, poverty, rising fascism and insularity. 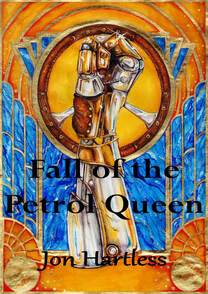